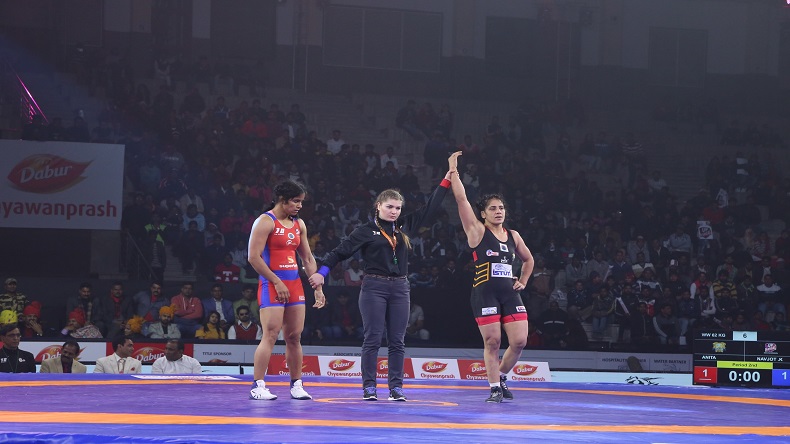 UP’s Jitender clinched the last bout of the evening against Punjab’s Amit Dhanker 10-9 in the men’s 74kg category in a closely fought encounter to ensure his team will make it to the last four stages on technical superiority. Punjab with eight points after this win moves to the top of the table and will again take on fourth-placed UP Dangal in the semis while second-placed Haryana Hammers will lock horns with third-placed Delhi Sultans in the other semi-final.

#PWL4 @punjabroyals17 vs @updangal: What a match and a fabulous edge leading performance by @updangal who though lost to Punjab 3-4 which is already in the semi’s have made it through to the semi-finals, because of #Jitender won the last bout @SPN_Action @wrestling #MatLePanga pic.twitter.com/UuqX0hFrhS

The Haryana cop Anita, who is making a comeback to wrestling after childbirth, gave her all against the technically superior Navjot to win the bout by scoring the last point and clinch the tie for the defending champions. Earlier, UP Dangal’s 2018 Asian Games silver medalist Giorgi Sakandelidze came from behind to get the better of Punjab Royals’ 2018 Commonwealth Games silver medalist Korey Jarvis 4-2 in the men’s 125kg superheavyweight category to help his team take an early lead.

The fearless Anju came out strongly and even took a four-point lead with a takedown against world champion Vanesa Kaladzinskaya of UP Dangal in the women’s 53kg category. But the Belarus wrestler’s experience helped her come back for a 12-6 win and put the UP Dangal’s 2-0 ahead in the tie.

Padmashree and world No. 1 Bajrang Punia got the defending champions Punjab Royals back into the game with a convincing 7-0 win over an aggressive Pankaj Rana of UP Dangal in the men’s 65kg category. The 2017 Asian Championships silver medallist and UP Dangal’s giant-killer Sarita couldn’t recreate the magic of her last few bouts and went down to the 2018 European championships silver medallist Mimi Hristova in the women’s 57kg category to bring Punjab Royals level to 2-2 after four bouts.

Punjab Royals sneaked ahead 3-2 in the tie when the 2012 Olympics bronze medalist Dato Magarisvili got the better of UP Dangal’s 2018 European U23 silver medalist Irakli Misituri 5-0 in the men’s 86kg category.